As you know, all independent schools in the UK are required to meet the Independent School Standards Regulations. They're all inspected against these standards by the relevant authority, be it the ISI or Ofsted. There are eight parts to these standards that cover areas from education quality to student welfare.

As you can imagine, it’s imperative for independent schools to meet these standards, so we’ve summarised them below to give you a quick reference guide.

Are The Independent Schools Standards Compulsory?

Independent schools aren't legally obligated to follow the Independent Schools Standards. However, upon inspection, authoritative bodies do take the standards into account. For example, the ISI writes that "key messages will be incorporated into ISI’s documentation for Inspectors", meaning a lot of what they look for will be called for in the standards.

The guidance within the Independent Schools Standards states:

“Inspectors will take this guidance into account when reporting to the Secretary of State on the extent to which the independent school standards are being met, or are likely to be met, in relation to an independent school.”

As you can see, even though the guidance is ‘non-statutory’, it’s very much influential within any reports.

As we’ve mentioned, the standards are divided into eight sections. Here’s a summary of each section. However, please note that this isn't intended to be exhaustive.

“The overall purpose of part 1 is to ensure that a school has a curriculum which covers a broad range of subject disciplines, delivered through teaching that will enable all pupils to make good progress according to their abilities, and that such progress is properly assessed as part of a continuous process which feeds back into lessons.”

This section expands on the required curriculum policy set up by the UK government. It states that independent schools should put resources into providing a well-rounded curriculum, career advice and work within the Equality Act 2010.

It also covers areas such as school libraries and what's included within them, as well as internet and WiFi safeguarding.

“The purpose of this part is to ensure that pupils’ development in non-academic terms will enable them to play a confident, informed role in society, have a fully developed value system and be able to interact with other people in a positive way.”

This section is more holistic than others. It suggests independent schools should have a system in place that embeds within students fundamental moral values, as well as the following:

“The standards in part 3 cover a wide range of subjects but in general are designed to ensure that so far as possible, pupils are safe and their well-being is promoted.”

Part three focuses on the absolute importance of providing a safe and secure environment for learning and development. It’s also about the analysis and mitigation of risk.

It’s similarly focused on providing policies that defend and provide for the welfare of students when they're in school, with emphasis on anti-bullying and ensuring students have access to welfare resources outside of school hours.

“This part of the standards sets out, in detail, the checks which schools (and in some cases the Secretary of State) have to make to ensure that staff, supply staff and proprietors or members of proprietor bodies are suitable for the posts they occupy.”

There are many ways in which schools can check an individual before hiring. In a lot of cases, the regulations currently in place are at risk of misinterpretation. The standards recommend that independent schools also read through the ‘Keeping Children Safe in Education’ legislation, which details effective procedures in full.

It essentially covers the advised checks to place on staff members, supply staff and any proprietors the school happens to work with. It also states this information should be kept in a single, secure location and be in-line with GDPR regulations.

Part 5: Premises of and Accommodation at Schools

Part five is the smallest section of the Independent Schools Standards as it's already covered in detail by other legislation, namely ‘Standards for school premises’. For example, part five states:

“The fact that a school’s premises at present cannot physically meet a requirement of the standards does not exempt the proprietor from meeting the requirement, if necessary by adaptation of the premises. In some cases (e.g. space for physical education) it may be possible to make the necessary arrangements through off-site facilities.”

This section mainly covers advice and regulations for the premises of an education provider, in relation to the School Premises Regulations of 2012. Those regulations provide guidance and recommendations regarding areas such as:

“This part sets out what information must be provided or made available to parents of pupils and parents of prospective pupils, and to certain other people or agencies. It also contains requirements about the publication of information.”

This section determines what information should be provided to parents for them to build up a ‘picture’ of the educational establishment. For example, it initially states independent schools need to provide the following:

It also states information should be properly provided upon the request of a concerned parent.

Part 7 – Manner in Which Complaints Are Handled

“This part of the standards sets out requirements about a complaints procedure to deal with complaints from parents of pupils.”

Part seven, as it says, is concerned with the complaints of parents. It advises that complaints should be dealt with in three levels; formal, informal and hearing level. The hearing would need to include an independent party.

The Independent Schools Standards also state all schools must draw up an official complaints process that's easily available to anyone upon request.

Part 8: Quality of Leadership In and Management of Schools

“The Secretary of State must prescribe standards relating to the quality of leadership in and management of independent schools. As is the case with the other standards, the approach behind this standard is to focus on required outcomes.”

This section concerns itself with the procedure for any other standards not being met and how they relate to a lacking standard of leadership. The guidance covers what might be proposed to improve management within the school, which could include both employees and governing bodies.

As previously stated, this list isn't exhaustive or a complete summary of the Independent Schools Standards - you can find the full document here.

The UK education system is currently under strain from both the COVID-19 Pandemic and uncertainty surrounding Brexit outcomes. To help guide you through these important subjects, download our guide.

The State of Higher Education: Post-Lockdown and Post-Brexit

For information on what schools and higher education, such as universities in particular, can do to prepare for these issues, now and in the future, download our helpful guide, ‘The State of Higher Education: Post-Lockdown and Post-Brexit’. 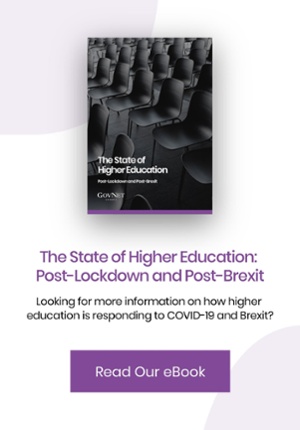 The Teachers’ Pension Scheme (TPS) has changed – do your Common Room understand how?